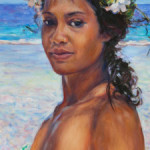 Portraiture’s roots are found in ancient civilizations and most likely prehistoric times, although few of these works survive today. Portrait painting is a genre in painting, where the intent is to depict the visual appearance of the (human) subject. Portraitists may create their work by commission, for public and private persons, or they may be inspired by admiration or affection for the subject.
A well-executed portrait is expected to show the inner essence of the subject (from the artist’s point of view) or a flattering representation, not just a literal likeness. As Aristotle stated, “The aim of Art is to present not the outward appearance of things, but their inner significance; for this, not the external manner and detail, constitutes true reality.” Central to the successful execution of the portrait is a mastery of human anatomy. Human faces are asymmetrical and skillful portrait artists reproduce this with subtle left-right differences. Artists need to be knowledgeable about the underlying bone and tissue structure to make a convincing portrait.
Portrait painting can depict the subject ‘full length’, ‘half length’, ‘head and shoulders’ (also called a “bust”), or ‘head’, as well as in profile, “three-quarter view”, or “full face”, with varying directions of light and shadow.
Read more… 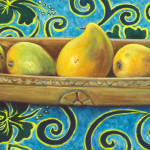 Still life is a work of art depicting mostly inanimate subject matter, typically commonplace objects which may be either natural (food, flowers, dead animals, plants, rocks, or shells) or man-made (drinking glasses, books, vases, jewelry, coins, pipes, and so on). Still-life paintings often adorn the interior of ancient Egyptian tombs, have also been found in the Roman wall paintings and floor mosaics, The popular appreciation of the realism of still-life painting is related in the ancient Greek legend of Zeuxis and Parrhasius, who are said to have once competed to create the most lifelike objects. Historically, still life occupied the lowest rung of the hierarchy of genres, but was extremely popular with buyers. With the rise of the Impressionist and Post-Impressionist painters still life was avidly practiced by artists. The first four decades of the 20th century formed an exceptional period of artistic ferment and revolution. Avant-garde movements rapidly evolved and overlapped in a march towards nonfigurative, total abstraction. The still life, as well as other representational art, continued to evolve and adjust.
Read more… 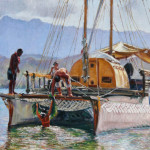 Genre are paintings of scenes from everyday life, of ordinary people in work or recreation, depicted in a generally realistic manner. Genre art contrasts with that of landscape, portraiture, still life, religious themes, historic events, or any kind of traditionally idealized subject matter. Intimate scenes from daily life are almost invariably the subject of genre painting. The elimination of imaginative content and of idealization focuses attention upon the shrewd observation of types, costumes, and settings.
Read more… 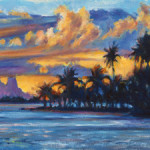 Landscape art is the depiction in art of landscapes, natural scenery such as mountains, valleys, trees, rivers, and forests, and especially art where the main subject is a wide view, with its elements arranged into a coherent composition. In other works landscape backgrounds for figures can still form an important part of the work. Sky is almost always included in the view, and weather is often an element of the composition. Detailed landscapes as a distinct subject are not found in all artistic traditions, and develop when there is already a sophisticated tradition of representing other subjects. The word “landscape” entered the modern English language as landskip (variously spelt), an anglicization of the Dutch landschap, around the start of the 17th century, purely as a term for works of art, with its first use as a word for a painting in 1598. The recognition of a spiritual element in landscape art is present from its beginnings in East Asian art, drawing on Daoism and other philosophical traditions, but in the West only becomes explicit with Romanticism.
Read more… 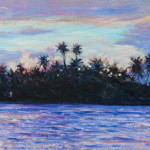 The 19th century held many milestones for the history of landscape art. Barbizon painters such as Théodore Rousseau and Charles Daubigny became less concerned with idealized, classical landscapes and focused more on painting out-of-doors directly from nature—a practice known as plein air painting. Gustave Courbet’s radical painting techniques and independent spirit paved the way for the next generation of painters—the Impressionists. The Impressionists, comprised of artists including Claude Monet, Camille Pissarro, Auguste Renoir, and Alfred Sisley, would devote most of their careers to studying and painting the landscape, working most often out-of-doors. The influence of Courbet’s distinct use of paint and the way he structured his landscape views extended well beyond Impressionism, deeply impacting the work of Cézanne and Van Gogh, as well as painters in the 20th century.
Read more…